Women and Creatine - If you've been in the Fitness community for a while and are interested in optimized sports nutrition along with the appropriate dietary supplements, you have definitely heard about creatine products. You may wonder what this supplement is about, or it may make sense to try it out for yourself. In this article we would like to answer your most important questions about creatine products while at the same time clearing up some prejudices that are widespread among us, as women in particular.

What is creatine actually?

Before we go deeper into the matter, we should first clarify what creatine is. Creatine) Contrary to many assumptions, this is not a steroid or prohibited substance. It is a substance that has absolutely nothing to do with hormones. The origins of creatine research date back to the early 19th century, when scientists identified the material as a key component of mammalian muscle tissue. Accordingly, the name creatine derives from the ancient Greek word kreas, which simply means meat. The substance is thus also produced in the human body, whereby this process takes place primarily in the liver with the aid of the amino acids arginine, glycine and methionine. Although amino acids play a key role in creatine synthesis, overall, they are not proteins. In truth, creatine is metabolized completely differently than proteins.

How is it recorded?

Because your body is capable of producing creatine on its own, unlike most other micronutrients, it is not an essential substance. Conversely, the supplementation still makes sense in terms of force since the creatine storage can be optimally utilized. Creatine based dietary supplements are usually made from a white and odourless powder that is made in highly specialized laboratories. On the market, however, a wide variety of creatine types are sold, of which creatine monohydrate and creatine ethyl ester are by far the most frequently purchased on the shop counter. However, the substance does not have to be absorbed through dietary supplements, as it is also found in various foods such as beef, liver, lamb and fish.

How does creatine metabolism work?

Creatine is basically an energy-rich phosphate that helps your body generate energy for its muscular work. Basically, the energy of your muscles based on the energy source ATP, which is split during muscle contraction, when the substance ADP arises. At this point, the creatine comes into play, which ensures that ADP can be resynthesized to ATP. The fuller your natural creatine stores are, the longer your muscles can work at the maximum performance, which is particularly important in the context of strength training, because only then can maximum growth stimuli be set.

What are the benefits of taking creatine for women?

Although most studies have been conducted on the effects of creatine products on males, women's intake understandably has the same benefits, as the genders are not as different as many other claims. By taking it you can increase your performance, especially in the area of ​​maximum strength by up to 20 percent. As a result, it also increases the muscle stimulus acting on the growth stimulus, which leads to an optimization of muscle building, respectively, as part of a diet ensures that a large part of hard-worked muscles despite calorie deficit is maintained. 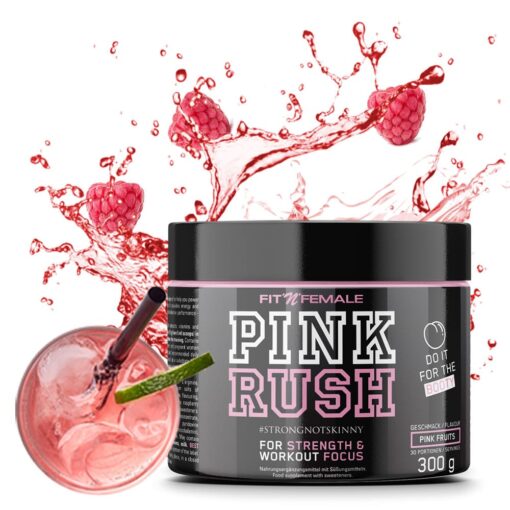 Make every workout a success with the "get strong pre-workout booster!"

What does it mean to be a non-responder?

Unfortunately, not all people enjoy the benefits of creatine intake because, as many studies have shown, taking creatine does not effect some people. Accordingly, these "non-responders" do not benefit from the positive effects on maximal strength as well as anaerobic-alactic acid performance. This phenomenon is not fully understood in science yet. However, it is believed that people who have a large muscle cross section and also have mainly so-called fast-twitch muscle fibers respond significantly better to creatine intake than people with a small muscle cross section and a preponderance of so-called slow-twitch muscle fibers especially needed for endurance services.

Can I become a responder?

Admittedly, whether you are a responder or a non-responder, you can not influence or change it because the composition of your muscles is primarily determined by your genetics. However, you can take some steps to increase the likelihood that as much of the supplemented creatine as possible actually gets into your muscle cells. The basic requirement for optimal intake is to make sure you are taking enough creatine. In this regard, a daily dosage of 0.1 grams per kilogram of body weight is recommended. You can also encourage muscle cell transport by always taking creatine supplements with a short-chain carbohydrate transport matrix. For example, apple or grape juice is predestined here. In addition, it's important that you give creatine time, because the time it takes to replenish your creatine stores takes seven to ten days before you notice significant performance differences.

Will I store water through creatine products?

Many women are afraid that by taking creatine they will store extra water that makes them look bloated. At this point we can largely give the all-clear, since studies show in black and white that women through the creatine intake store significantly less water than men. In general, however, these are not more than 1 to 1.5 kilograms, which are distributed on the muscle cells and not on the connective tissue. Accordingly, it does not come to characteristic deposits, such as those caused by taking birth control pills, but a storage that makes the muscle work voluminous. In addition, you should know that this water retention is necessary so that at all an additional power delivery can take place. So even if you are a person who already tends to go up the walls at the slightest gain in weight, you should always keep in mind that there is basically no other dietary supplement that works as effectively and reliably as creatine.

How much creatine should I take?

It used to be thought that in the context of creatine supplementation it was imperative to perform a so-called charging phase, which adjusts the muscles accordingly to the optimization of creatine stores. Not least because of the unpleasant side effects, which brings the daily intake of more than 10 grams, sports scientists recommend today a body weight adjusted intake. In addition, it has been found that the continued intake of lower doses is at least as effective as the previous practice. The bottom line is a daily intake of 0.08 to 0.1 grams per kilogram of body weight.

Which creatine is the most useful?

As mentioned at the beginning of this article, creatine monohydrate is the most widely used form of administration and is therefore best supported by studies. Nonetheless, over the past few years, scientists have repeatedly tested new creatine products that have been given different chemical compounds, for example, to improve their ability to absorb and to completely eliminate isolated side effects such as flatulence, nausea and diarrhea. There is no doubt that products such as creatine ethyl ester can be absorbed a bit better, but the small advantage is out of all proportion to the price premium to be paid. Accordingly, it is advisable to rely on a conventional monohydrate.

CREATONE is an innovative creatine product in the form of chewable tablets with orange taste! So no mixing or swallowing of oversized capsules and fits naturally in every training bag! 3 chewable tablets contain 3 grams of creatine monohydrate, which corresponds to a daily portion for women with the goal of building muscle. 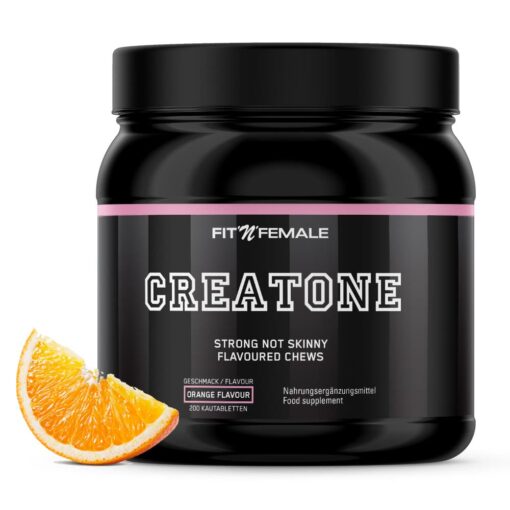 Ideal for building muscle and perfect for traveling.

Which products can be optimally combined with creatine?

Here we clearly recommend EAA's, which are for example available in the product TRAIN. A sufficient supply of protein is the indispensable basis for muscle building. And what do proteins consist of? Correct, amino acids that act as building blocks for proteins. But did you know that some amino acids are significantly more important for your body than others? Of the 20 amino acids in total, the so-called essential amino acids (EAA) play a special role.

The time-tested Whey protein remains its reason for being. However, we recommend the purest form of whey protein, namely whey isolate. Preferred intake time is immediately after training or in the morning directly after getting up.

Can I also take creatine products during pregnancy?

Understandably, this question is often asked by women. But you do not have to worry about that at the moment, because creatine has absolutely no negative influences, so you can safely use it in a pregnancy. In addition, a new 2015 study suggests that supplementing with creatine may positively influence the neural development of an unborn baby. At least, this finding is not outlandish, as creatine intake also promotes cognitive performance in adult humans.

With our Fit & Strong Bundle (package) you have everything, including creatine, which you need for a trained body. In addition to the products, you also get a free revenue plan and shaker. 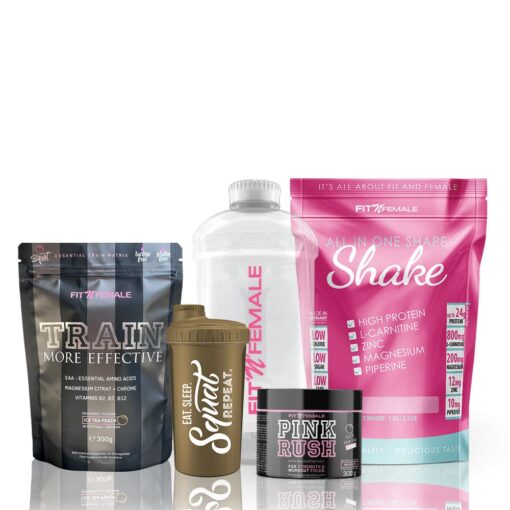 We use cookies to improve your shopping experience with us and to provide you with personalized content on our website. To continue to have the best experience on our website, we recommend that you accept all cookies.
accept-all Show details
Manage consent

We use cookies or similar technologies that are necessary for the functioning of the website. In the event that you give us your consent, we may also use optional cookies to enable the functionality of certain applications on our website, to analyze visitor data, and to personalize content and ads.
Necessary cookies Always Enabled
These cookies are necessary for the website to function properly. Some of the following actions can be performed with these cookies:- Save items in a shopping cart for online purchases - Save your cookie settings for this website - Save language settings - Log in to our portal. We need to verify that you are logged in.
Functional cookies
These cookies enable more functionality for our website visitors. These cookies may be set by our third party service providers or our own website. The following functionalities may or may not be enabled if you accept this category:- Live chat services- Watch online videos- Social media sharing buttons- Sign up with social media on our website.
Advertising / Tracking
These cookies are set by external advertising partners and are used for profiling and data tracking across multiple websites. If you accept these cookies, we can display our ads on other websites based on your user profile and preferences. These cookies also store data about how many visitors have seen or clicked on our ads in order to optimize advertising campaigns.
Analytics
Analytical cookies are used to understand how visitors interact with the website. These cookies help provide information on metrics the number of visitors, bounce rate, traffic source, etc..
Save & Accept