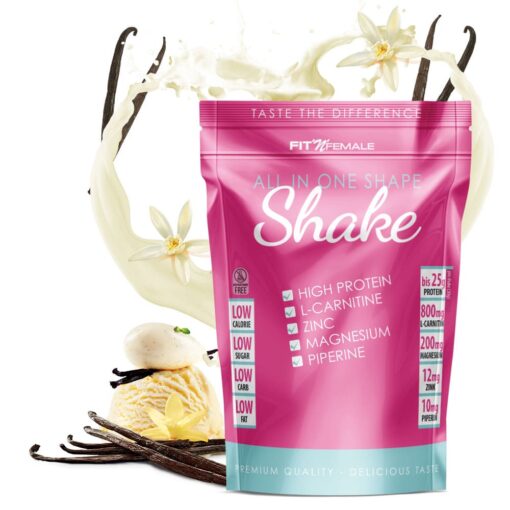 The delicious all-in-one shake with a unique recipe.

The All-In-One Shape Shake supports fat burning and was developed by FitnFemale especially for women. With the unique composition of additives it increases your metabolism and aids in regeneration.

In addition to the valuable and important protein, the shake contains L-carnitine, magnesium, zinc, piperine and vitamins. This combination is very popular with a highly physical routine and ensures optimal results. This composition, rounded off with a delicious taste, makes the product unique. You can take between 1-3 shakes per day, as needed.

As the name implies, Piperin has done something with pepper. In fact, it is an alkaloid that provides the sharpness in the pepper. The highest proportion of piperine is in black pepper, where the concentration is between 4 and 9 percent, depending on the variety. The concentration is similarly high in white pepper. As a result, piperine falls into the same category of active ingredients as capsaicin contained in chillies and peperonis.

Piperin has some interesting effects on the human body that have been scientifically researched. The main effect of piperine is aimed at increasing the metabolic rate, similar to capsaicin. A study by South Korean researcher Ui-Hyun Park has also shown that the substance can prevent the organism from forming new fat cells. Another study concluded that piperine also has a positive impact on cholesterol levels.

But that is not enough. Piperine is also associated with improving the nutrient uptake of the organism. In fact, according to a study published in the Journal of Ayurveda and Integrative Medicine, the improved intake of micronutrients such as vitamin A, vitamin C, vitamin B5, beta carotene and selenium.

L-carnitine is an amino acid, a naturally occurring substance in humans. This amino acid is responsible for the transport of fatty acids into the mitochondria of muscle cells. In combination with sports activities, this energy can be used and burned.

In technical article «L-carnitine: what is it and when does it make sense» We have dedicated ourselves to the topic L-carnitine in more detail.

The All-in-One Shake contains Whey (whey protein), casein (milk protein) and Eggprotein (egg white) as protein sources. This is because a multicomponent protein achieves a significantly higher biological value than individual proteins. The higher the biological value, the more efficiently dietary proteins can be converted into body proteins.

Which products complement each other with the All-In-One Shape Shake?

The All-In-One Shape Shake combines well with all FitnFemale products. 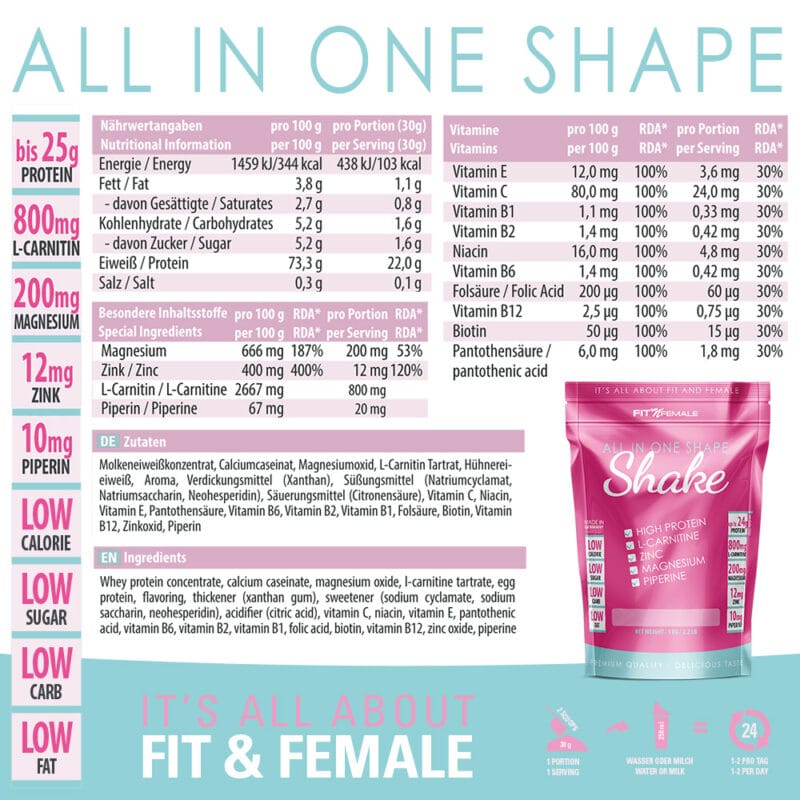 The products are just amazing! Am amazingly satisfied with everything. Taste and nutritional value are awesome and success can be seen even after just one week. I am very satisfied.

I am thrilled with your great selection and am pleased to try the products.

Taste of the isolates are not artificial. Great company and super fast delivery Top !!! Always happy to order!

I think the shop is great. Also the homepage is class. Everything is explained well and understandable. That's why I ordered the training and nutrition plan.

Great support, unique products - I am a huge fan 👍

Fast processing, fast shipping and the products are also top!

Super fast delivery. The goods correspond to the description. Very good things. Many thanks.

The delivery is super fast. The next day the parcel is there. Your products are great and until now I am completely satisfied.

Fast and free delivery, easy payment via Klarna, great perks, goodies in packets, what more do you want?